Riverrunning (practitioners use one word) is the essential - and some would say most artful - form of kayaking.  Important to a riverrunner is the experience of the river in its continuity rather than, focusing on its punctuated "vertical" features (e.g. standing waves, play-holes and waterfalls). As for kayak design, a "pure" riverrunning boat can be said to have "driving ability" - a blend of qualities that enables the paddler to make the most of the differential forces in the river's currents. For example, instead of spinning or pivoting the boat to change its direction, a riverrunner will drive the boat in such a way as to make use of the river's surface features (e.g. waves, holes and eddylines) thus conserving the boat's speed and momemetum.  A principal design characteristic of riverrunning kayaks is their comparatively longer length and narrower breadth (generally not less than 285 cm in length or more than 63 cm in breadth). The longer length at the waterline not only helps to carry speed but the longer arcs thus created between stem and stern allow the boater to more efficiently and gracefully carve into, through and out of eddies and other currents. 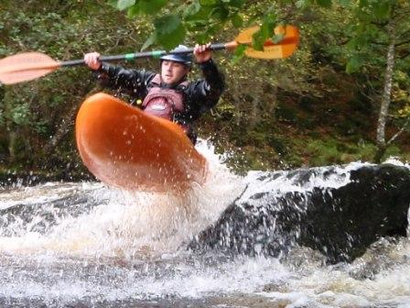 Creeking is perhaps best thought of as a subcategory of river running, involving very technical and difficult rapids, typically in the Grade/Class IV to V range. While people will differ on the definition, creeking generally involves higher gradient and is likely to include running ledges, slides, and waterfalls on relatively small and tight rivers, though some will allow for very large and big volume rivers in their definition. Kayaks used for creeking usually have higher volume (more gallons or litres of displacement) and more rounded bow and stern, as these features provide an extra margin of safety' against the likelihood of pinning (getting a kayak wedged in such a way that it cannot be removed without a mechanical advantage system, such as between rocks and/or underwater), and will resurface more quickly and controllably when coming off larger drops. Creek boats usually have increased "rocker," or rise, fore and aft of the cockpit for manoeuvrability. Extreme racing is a competitive form of this aspect of whitewater kayaking, in which kayakers race down steep sections and or generally dangerous sections of whitewater. 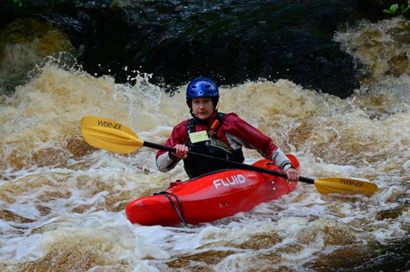 Contact us today if you are interested in finding out more about our club either as a member, player, coach or volunteer.

Details of Data Controller are